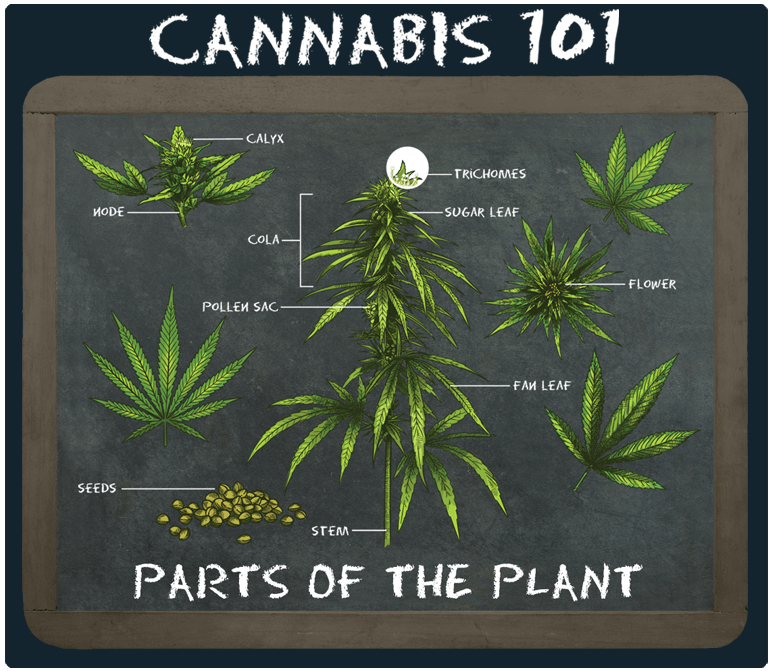 What Makes up the Cannabis Plant?

The Cannabis plant has a fascinating anatomy learn more below

PARTS OF THE PLANT

Calyx – The calyx is the part of the flower that forms first, and eventually becomes the base that supports the rest of the flower.

Within the cannabis calyx, you will find all the important reproductive organs, including the pistil and stigmas. You will also find resin glands, which are responsible for producing cannabinoids, including THC.

Cola – The central flower cluster that forms at the top of the main stems in mature female cannabis plants. Buds that grow on the cola are the largest and are prized for their high concentrations of active resin. Their size and luster make them a popular choice for cannabis photography.

Fan Leaves – Fan leaves are the large, iconic leaves of the cannabis plant. They capture light for the plant and typically have little-to-no resin and are usually discarded when trimming.

Flowers – Also known as “buds,” the flowers of a cannabis plant are the fruits of your labor. They contain the cannabinoids and terpenes that get you high or offer health benefits. Flowers only grow on female cannabis plants and must be dried before consumption.

Node – A node is a point at which a branch grows off the main stem, or one branch from another branch. Fan leaves and buds can grow on some nodes, but not necessarily all.

When determining the sex of a cannabis plant, the beginning of male and female sex organs will appear at the nodes.

Pollen Sacs – Pollen sacs are small balls on the male cannabis plant that open when they’re fully mature, releasing pollen into the air. The tiny pollen grains hold the male plant’s DNA information which combines with the female gametes that contain its DNA information, resulting in cannabis seeds.

Seeds – Seeds are produced in female cannabis plants and carry the genetics of a male and female. Seeds need to germinate to sprout and will grow a taproot, which will become the main root that anchors the plant.

Stem – The main stem, or stalk, of a cannabis plant grows straight up from the root system and supports all lateral branches. The stem gives a plant structure and stability.

Often, growers will top, or cut off, the stem, which forces the plant to grow out laterally more, creating more bud sites.

Sugar Leaves – Sugar leaves are the small, resin-coated leaves that buds form around. Sugar leaves are usually saved as “trim” during harvest and can be used for pre-rolls, extracts, and other cannabis products.

Trichomes – The tiny outgrowths that cover the buds and leaves of the cannabis plant. They are usually very shiny, sticky, and aromatic, often appearing as a blanket of frost on the plant surface. Trichomes contain many cannabinoids, terpenes, and flavonoids that contribute to the plants flavor and effect.

Terpenes – One of the most unique things about cannabis as a plant is the smell. But what is it that causes the plant to have such a distinctive aroma? The answer is terpenes. Terpenes are aromatic oils produced by the trichomes, and are what causes the strong and distinctive smells associated with marijuana. Terpenes can be found not only in cannabis flower, but also in concentrates as they are produced by the trichomes that are extracted in the processing of cannabis concentrates.

Over 100 different terpenes have been identified in various cannabis varieties. This causes a difference in smell and taste between cultivars—some may tend towards citrus or pine, while others may be fruity, sour, or even smell faintly of gasoline. Terpenes have created a layer of cannabis preference beyond cannabinoid content or desired affect—think of the worlds of wine or coffee. As the cannabis industry continues to develop, we may see more focus on terpene distinction and a vast array of new cultivars with tasty, aromatic terpene profiles. Terpenes may also offer health benefits, and there is research being done exploring the wellness potential of these strong-smelling compounds.

Cannabinoids – Cannabis, marijuana, ganja, weed, and more—this is a plant that goes by many names. You know that cannabis affects the mind and body: but do you know why? The answer is cannabinoids. Cannabinoids are chemical compounds found in the cannabis plant, and they are responsible not only for the psychoactive effects of marijuana but for its health benefits. You may have heard of THC and CBD, the two most abundant cannabinoids, but did you know that cannabis contains at least 113 other cannabinoids? Some of these lesser-known compounds have shown promise for treating an array of health conditions in research studies.

THC (tetrahydrocannabinol) – THC is the cannabinoid responsible for the intoxicating effect of cannabis consumption. However, it has other uses as well. It also has been shown to have a vast array of medical uses, providing relief from pain, inflammation, nausea, and insomnia. It has also been shown to have neuroprotective properties, help combat eating disorders, and provide relief from symptoms of AIDS, cancer, and addiction. It is worth noting that you can consume small amounts of THC without feeling the intoxicating effects, allowing for some medical benefits to be reaped even by those who wish to avoid intoxication.

CBD (cannabidiol) – CBD is generally the second most abundant compound in the cannabis plant and is non-intoxicating. In recent years, the therapeutic benefits of CBD have been explored. It has been shown efficacy in treating autoimmune diseases, neurological conditions (like dementia, Parkinson’s’, MS, and epilepsy), diabetes, autism, ADHD, PTSD, Crohn’s disease, and some skin conditions like dermatitis and psoriasis.

THC and CBD often have a synergistic effect. Together, they have been found to have anti-cancer, anti-inflammatory, and neuroprotective properties. Almost cannabis products are available in varying levels of each cannabinoid. Work to your doctor to figure out which proportion is right for you and your needs.

Aside from THC and CBD, cannabis contains at least 113 other compounds, some of which have been seen to have medicinal uses. Check out these other major cannabinoids and learn about the potential benefits!

Learn more about Other Cannabinoids here and here.

THCV (terahydrocannabivarin) – THCV is similar in structure to THC. It has potential intoxicating effects but is found in such small amounts that it has little real intoxicating effect when you are consuming cannabis. It has been shown to be an appetite suppressant, making it potentially helpful in treating individuals with type 2 diabetes by controlling glycemic levels.

CBDV (cannabidivarian) – CBDV is similar in structure to CBD. It appears in larger amounts in high-CBD products. It has been shown to effectively reduce and treat epileptic episodes due to its anticonvulsant properties.

CBG (cannabigerol) – Both THC and CBD begin as CBG—when combined with certain enzymes, it becomes THCA and CBDA, the acids that are converted to THC and CBD upon exposure to heat. It has been shown to have neuroprotective properties and potential for treating conditions like Huntington’s Disease. It has also shown promise for treating glaucoma and Crohn’s disease.

CBC (cannabichromene) – CBC is the third most abundant cannabinoid in marijuana—in some cultivars, it even takes the second-place spot. It is non-intoxicating and works synergistically with other cannabinoids. It has been shown to have anti-inflammatory properties and to encourage cell growth in the brain.

Colloquially referred to as a “strain,” a cultivar is a cultivated variety of the cannabis plant. Each variety possesses common and distinguishable characteristics in appearance, cannabinoids content, and terpene profile. Each cultivar will likely be classified as indica, sativa, or hybrid. This refers to the type of cannabis under which the cultivar falls and the effects it can be expected to produce. Indica varietals are known for their relaxing, sleepy, body-centered effect, while sativa varietals are known for providing euphoric, energetic, mind-centered effects. A hybrid will contain characteristics of both, and it will likely be indicated which type the hybrid favors (e.g. a hybrid that favors sativa may provide you with the mental stimulation associated with sativa while still relaxing your body like an indica).

Get updates about our company and related news about canabis. Get exclusive access when we launch new products

Please install and activate the "Newsletter" plugin to show the form.